You need to build a mobile app that lists some data and shows details on a separate screen once user taps an item? Follow this complete guide on how to master React Native List and Navigator components to switch between a list and a detail screen.

If you don’t have any experience with React Native check out 3 Steps to Build Your First Mobile App with React Native. It explains the basics and how to set up required software to get started.

What are We Building

Our goal is to build an app that lists top 10 movies of 2016 in a beautiful list with background images and detail on each movie on a separate screen. The app has to work on both, iOS and Android devices. And here is what we want it to look like. 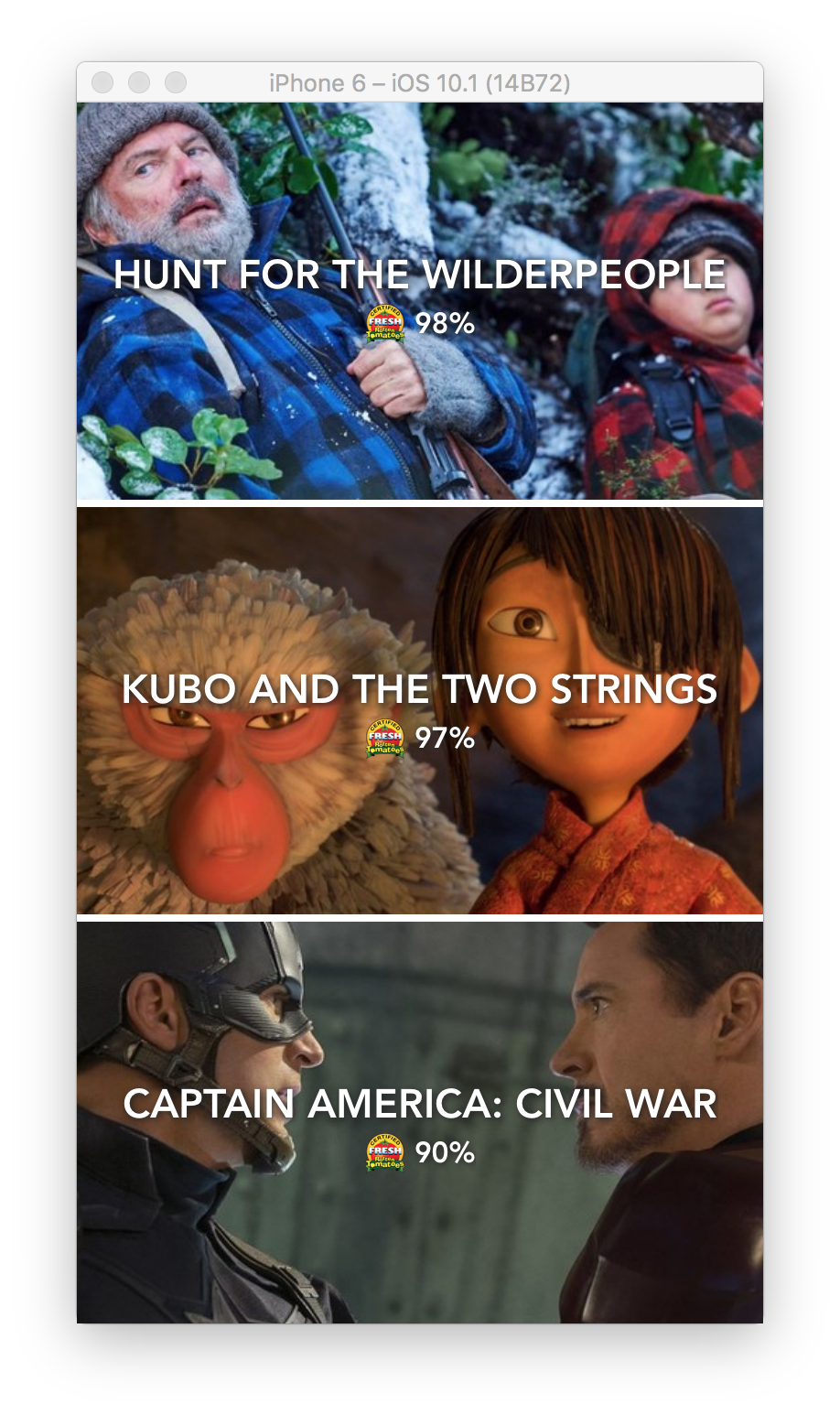 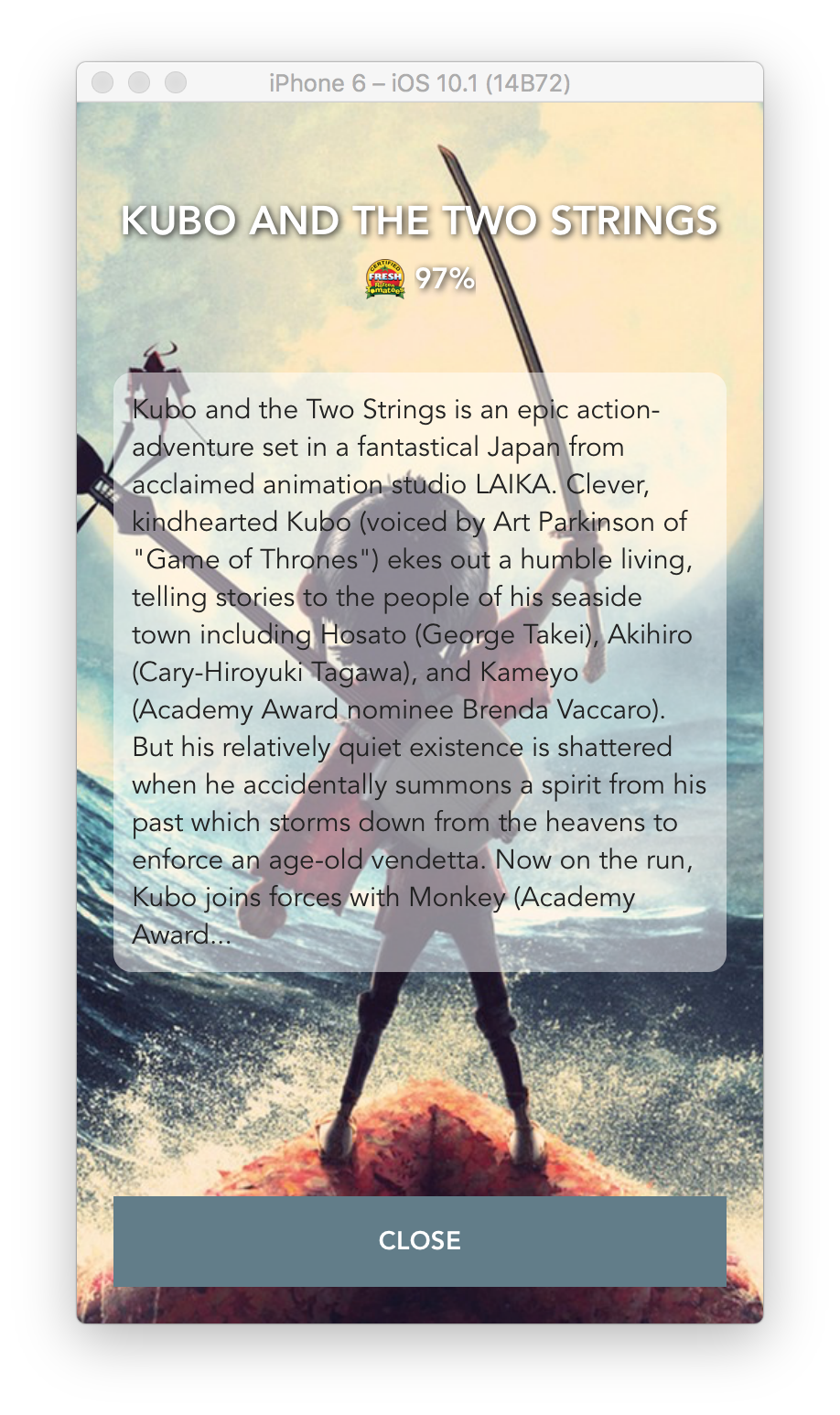 Set up the Stage

Let’s start off by creating a new app.

Open Terminal App and run these commands to initialize a new project and run it the emulator.

After that’s done, you should see React Native boilerplate app running in an emulator. 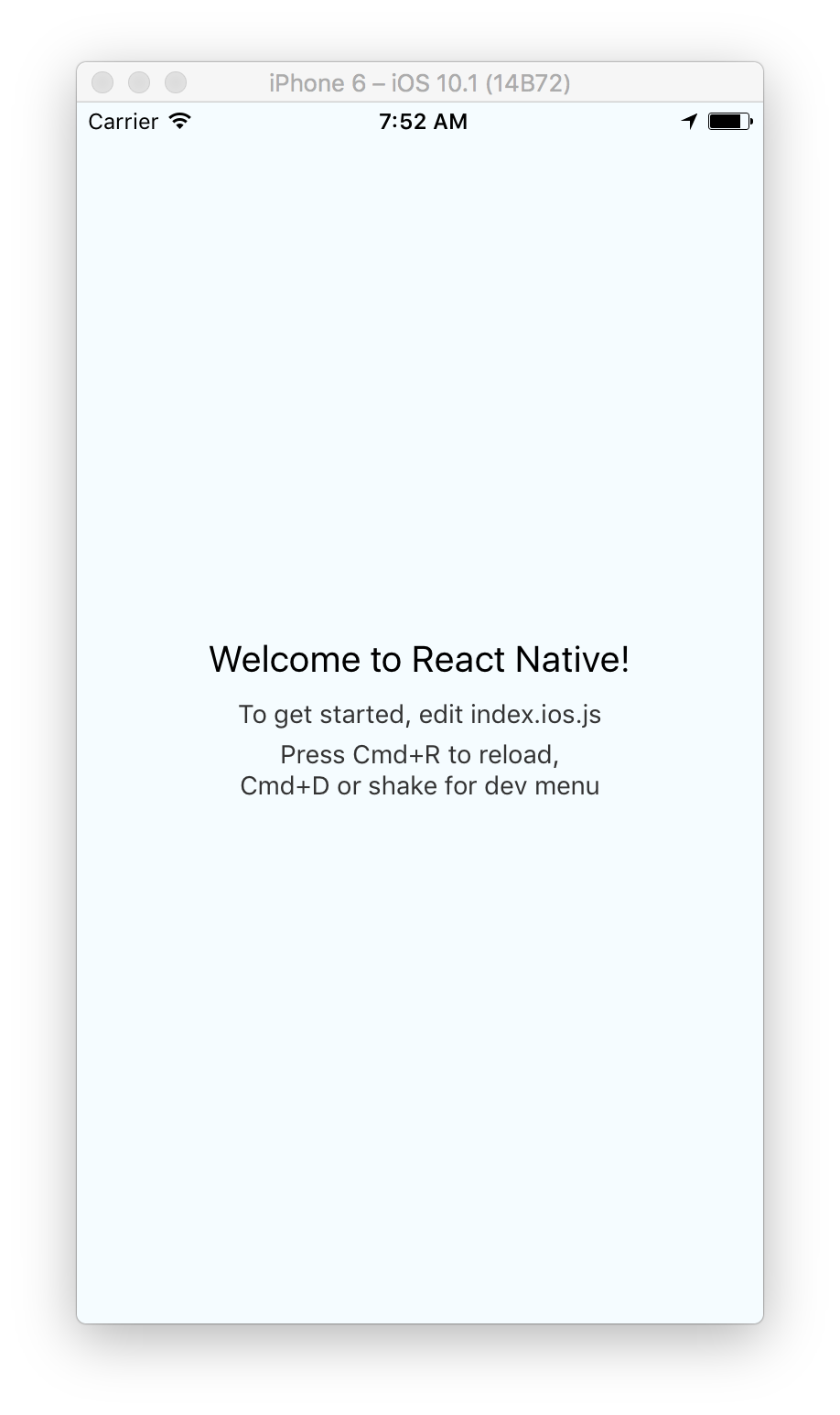 Once your app is up and running, press ⌘D and select Enable Hot Reloading. This will save you some time having to reload the app manually every time you make a change.

To see how that works just open index.ios.js file and change Welcome to React native to something else and save the file. The app should get updated immediately, without manually reloading it. Isn’t it great?

Open index.ios.js file and delete all of its content. Do the same for index.android.js. Let’s build our app from scratch to get a better understanding of how things work.

If you run your app on an iOS device, then index.ios.js gets executed, or index.android.js if you run it on Android. And, since we need our app to work on both platforms, we are going to have our app code in a separate file called App.js and then just import it in both index.ios.js and index.android.js to avoid repeating the same code twice.

So, go ahead and insert the following code into both, index.ios.js and index.android.js files.

All this code does, it just imports App component, which we haven’t created yet, and registers it as our main app component.

Once you save the file, you’re going to see an error screen. That screen is pretty self-explanatory and just tells us that App.js file we’re trying to import doesn’t exist. So, let’s fix it. 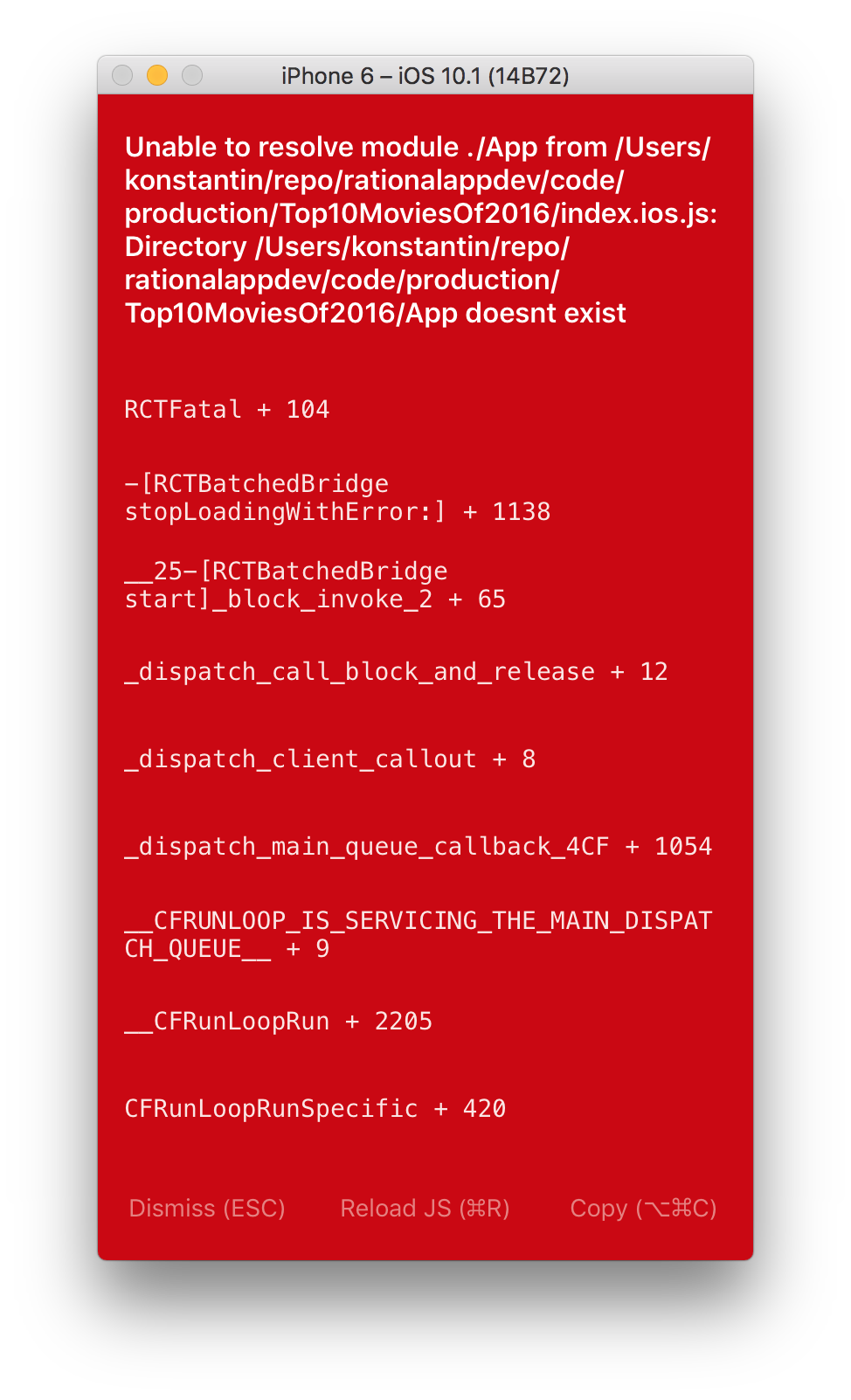 Create a file called App.js. And start off by importing components that we’ll be using.

Next, let’s define a route mapper function that will be responsible for handling navigation between a list and a movie detail screens.

There is only two routes in our app: list for a list and movie for a movie detail screen. We have some temporary text instead of an actual list, for now, just to make sure that our route mapper works as expected, and we’re going to replace it with an actual List component later. As you noticed, we put those handy to-do notes to remind us to update that code once we build List and Movie components.

And finally, let’s define App class. We’re going to use componentDidMount lifecycle hook, which runs after a component has been rendered, to hide the status bar. And we’ll use Navigator component, inside render() method, that will be handling navigation between screens.

Let’s check out how our app is looking so far. Go to the emulator, and press ⌘R to reload the app because that error broke hot reloading earlier and you have to reload it manually. 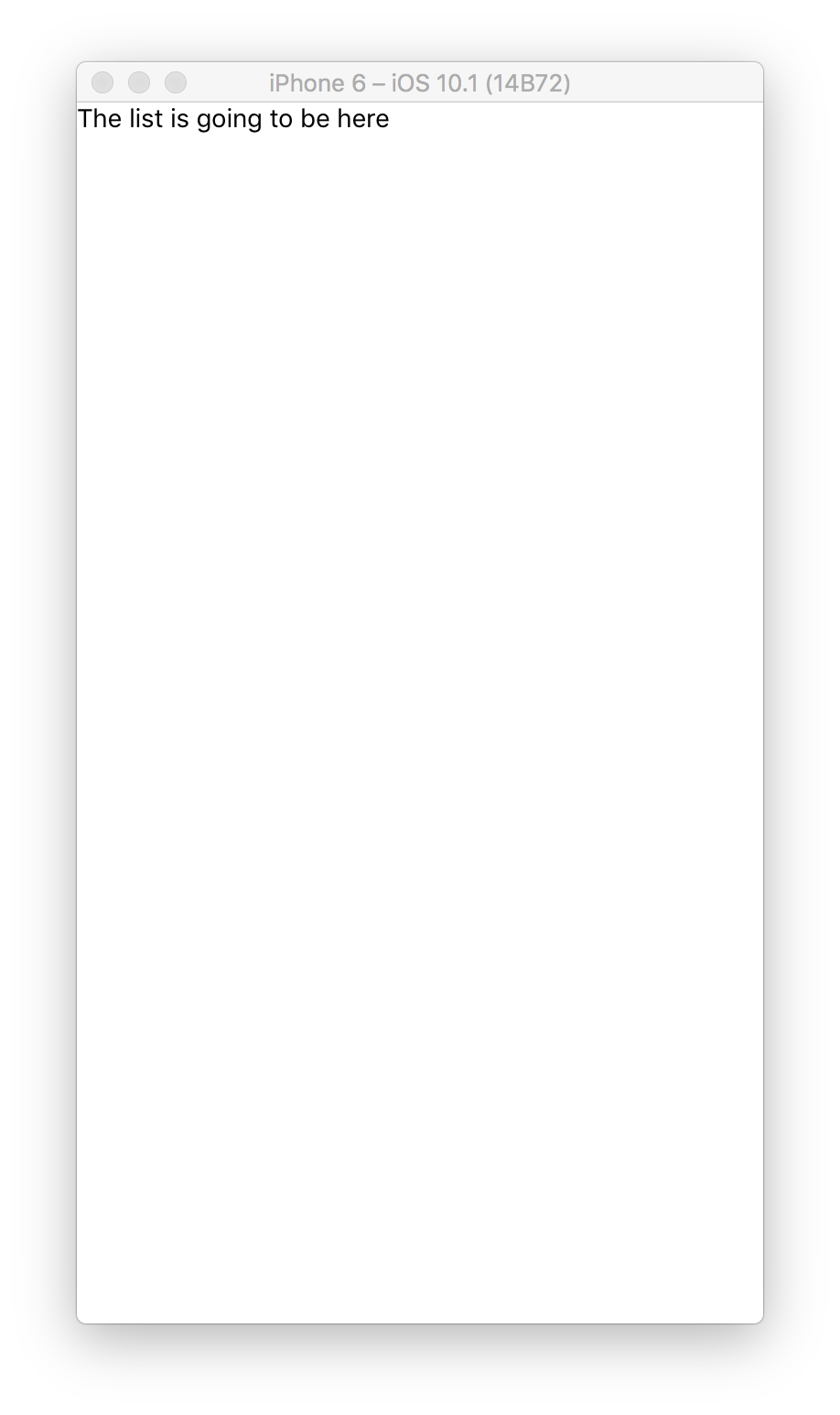 Ok, it looks like Navigator is working fine and it renders <Text>The list is going to be here</Text> component by default. That’s great.

It’s time to start building List component. Go ahead and create List.js file and start filling it up with the code.

First, import components that we’re going to use.

The next step is to figure out how are we going to get the data for the list. There are a few ways to get that data.

To make it easier for our demo app purposes let’s just add an array of data to List.js file after import statements.

It’s an array of movie objects, each of which has a title, rating, image, large image, and plot.

Let’s define List component class and outline what methods we’re going to need first, and go through each of them after.

You can export multiple classes, variables or functions, but only one can be exported as a default one.

Let’s go on a little detour and open up App.js file to make it use List component that we just created.

Then, find our to-do note and <Text>The list is going to be here</Text>

Let’s bring up the emulator and make sure that <List> component is being rendered. 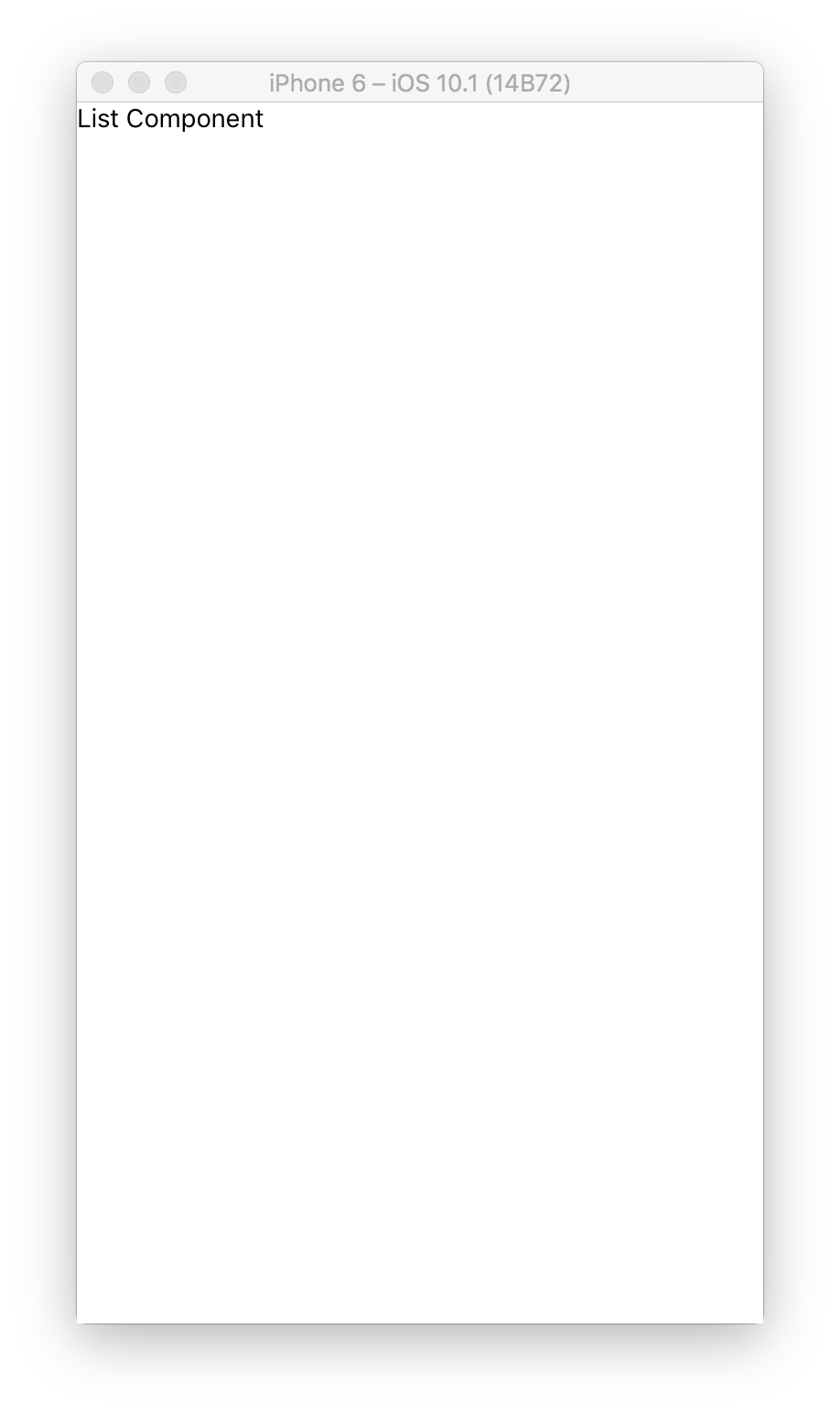 Now, let’s go back to List.js and continue working on it.

Let’s start with state. We’re going to use state to store movie data for ListView component. Let’s go ahead and add some stuff to our state = {} definition, so it’d look like following.

new ListView.DataSource creates an instance of DataSource object, which we’re going to use to fill it up with our movie data and use it for ListView component to render it on the screen.

Next, let’s update _fetchData_ and componentDidMount to load the actual data into this.state.dataSource once component has been mounted.

Let’s update _renderRow, which will be rendering each row in the list.

It returns ListView component with dataSource, renderRow, and refreshControl props. The latter is not required, so if you’re not planning on refreshing your data, you can omit it.

Let’s check out how our app is looking so far. 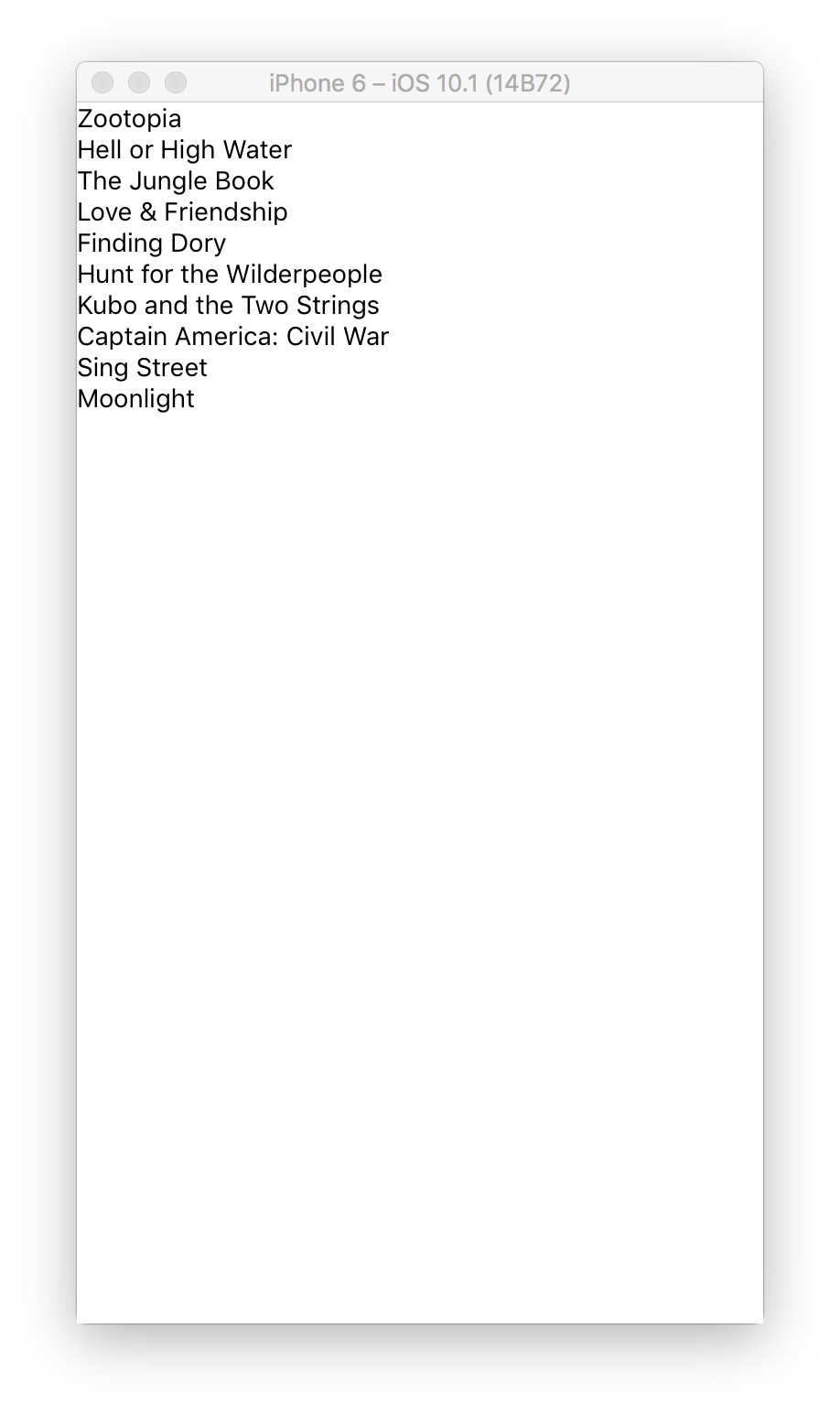 It’s time to make our list beautiful. And to do so we’re going to create a reusable component called Row, and then update _renderRow() method in List.js to use it instead of simple Text that we have now.

Let’s start off by creating a new file called Row.js.

It has only one, render() method, that returns Image component with some text and icon inside it, wrapped into TouchableOpacity component to allow user press on rows and navigate them to a separate movie detail screen using a function that we defined in _renderRow of List component in List.js file.

Update List.js to use Row Component

Let’s open up List.js file to make it use Row component that we just created.

Then, find _renderRow() method with Text component and a to-do note.

It returns Row component and passes movie object as movie prop, and a function to navigate users to a separate movie detail screen once a row is pressed as onPress prop.

Let’s bring up the emulator and see how our Row component is looking. 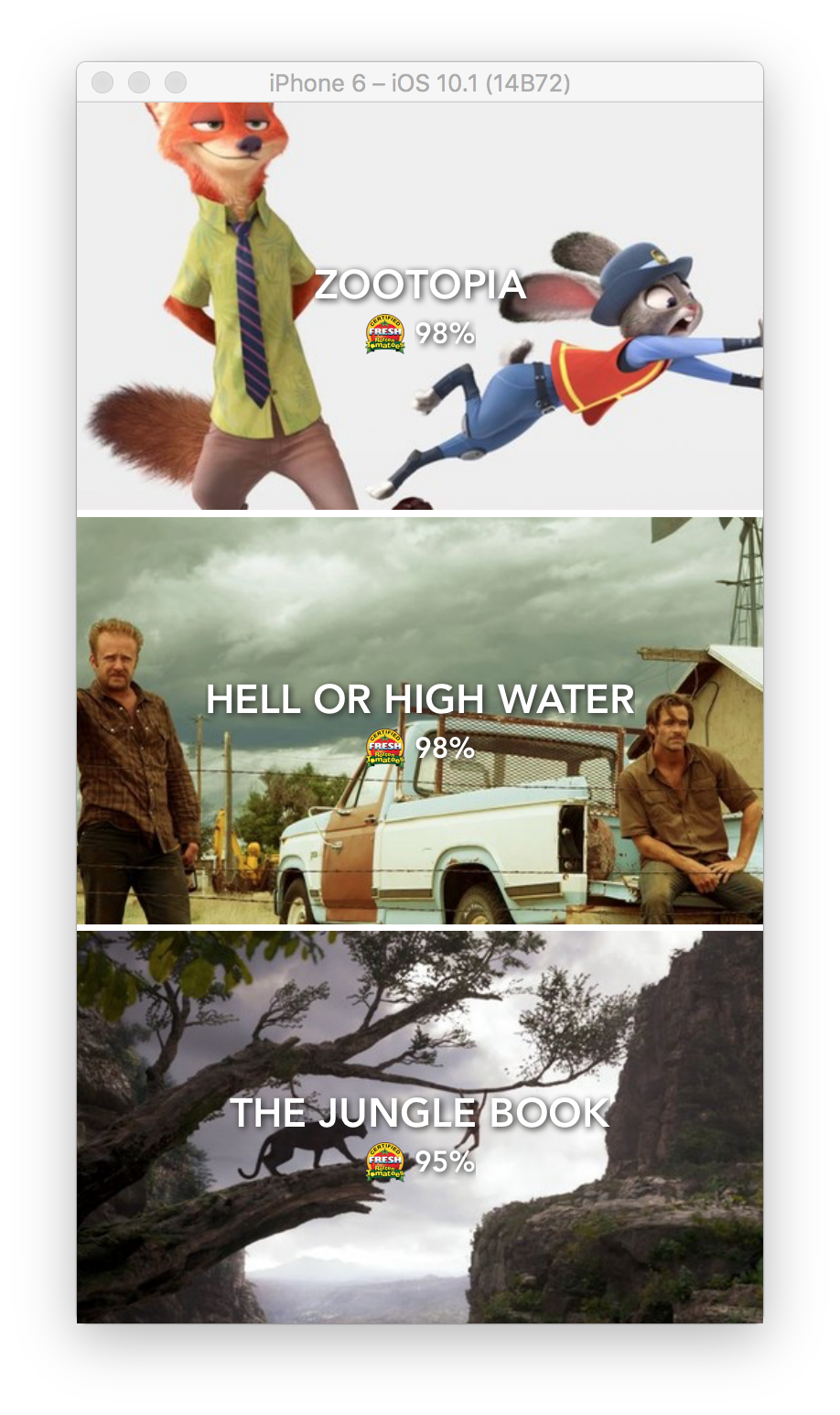 It looks much better. Great job so far. Hang on for a little while longer, and we’ll be done with the app soon.

The last thing left to do is a movie detail screen that appears when a user taps on a movie in the list.

Let’s start off by creating a new file called Movie.js.

It has only one, render() method, that returns flexible View component, which takes up all of the screen space, and contains a background image, movie title, rating, plot, and close button to go back to the list, using navigator prop that we passed from RouteMapper in App.js file.

Update App.js to use Movie Component

Let’s open up App.js file to make it use Movie component that we just created.

Then, find our to-do note

And replace it with <Movie> component

Now, let’s bring up the emulator and click on any movie to see how Movie component is working. 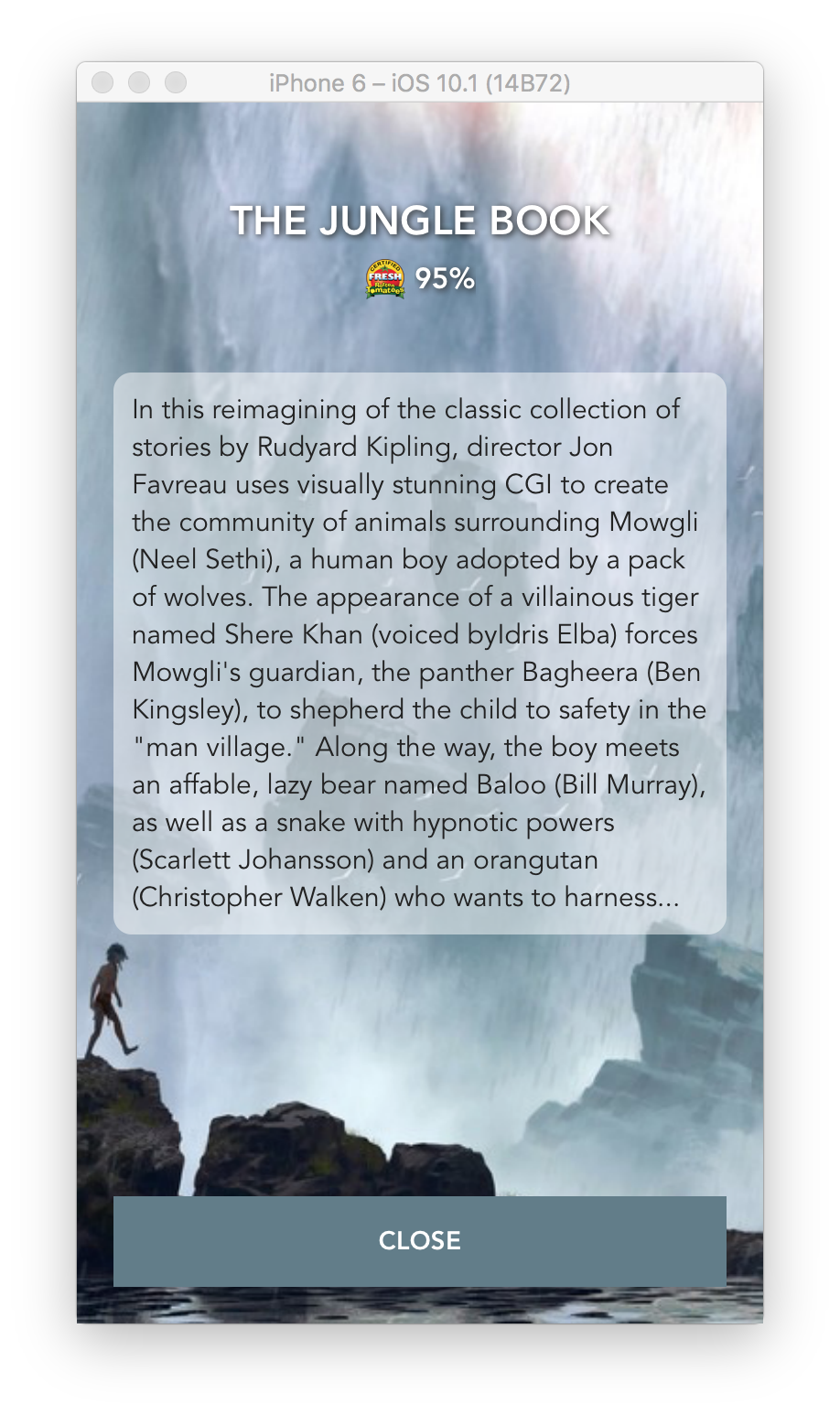 Looks pretty good. Congratulations! You did a great job!

And the best part of it is that you don’t have to do anything at all to adapt your code to run on Android. Just launch Android emulator and run react-native run-android in the terminal.

You can get the source code of the app using git. Just run in terminal:

To install React Native along with all required modules and launch the app execute:

You’ve learned a lot on how to build beautiful lists for your apps. You can dive deeper into React Native documentation to find out more features available for ListView component. And if you have any questions, just leave a comment.

I hope you enjoyed the tutorial. Subscribe to find out about new tutorials and learn how to build amazing apps!

Did You Enjoy This Article?

Sign up to be notified of new blog posts and be the first to receive helpful goodies!